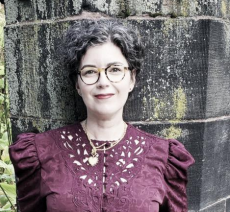 In 2021, the NYC Big Book Award received book submissions from around the world. Entries arrived from Africa, Asia, Australia, Europe, and North America. Cities such as Bangalore, Edmonton, London, Los Angeles, Melbourne, New York, Seattle, Singapore and Vancouver were represented among the entries.

Given the high level of competition, it’s all the more remarkable that Cleveland’s Dana McSwain won the horror category for her book Roseneath. Publishers, writers, editors, book cover designers and professional copywriters served as judges and selected award winners.

It's the fourth independent press award that Roseneath, which is set in Cleveland, has won to date, including the 2021 Indie Reader Discovery Award, the IBPA 2021 Benjamin Franklin Award and the 2021 Next Generation Indie Book Award. In addition, it was all accomplished without the traditional support of an agent or publishing deal. McSwain runs her own independent imprint and worked exclusively with local libraries, independent bookstores, bookstagrammers, YouTubers, and word-of-mouth to promote her book (which she accomplished during the pandemic without in-person promotions).

"Simply put, every agent and publishing house I talked to said my book didn’t have enough sparkly vampires in it to sell, and no one was interested in a middle-aged housewife from Cleveland and her Lakewood ghost story, so I did it myself," she tells us in an email.

To view the complete list of winners, visit nycbigbookaward.com/2021winners.