How HUD Subsidizes a Dangerous, Neglected Apartment Complex in Cleveland 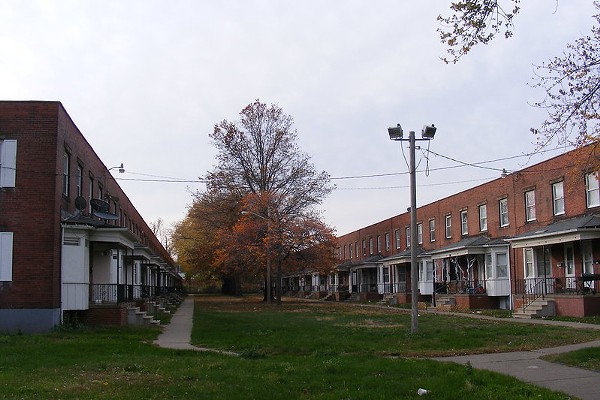 Terri Jackson has a long list of concerns about her government-subsidized apartment at Neal Terrace, a 121-year-old complex in Cleveland where she’s lived since 2012.

The carpet is peeling off the stairs and the banister is broken. Underneath the sink, there’s been a leak for so long that the pot set there to catch it has a thick layer of rust. She hasn’t been in the basement for two years because the patch of black mold on the wall and the pool that forms whenever it rains frighten her.

But what rankles her the most is the rats.

Before the rats showed up two years ago, she said, “I never knew rats eat your clothes. I never knew they eat your shoes.”

One night after a 12-hour work shift, she says she fell asleep on the couch with her feet on the floor. She was awakened by a nibbling on her toe.

“I’m like, I just got these brand new house shoes, and you want to eat ‘em up!” she said.

Jackson lives in multifamily housing owned by a private company, BNT Apartments LLC, and subsidized by the Department of Housing and Urban Development through the Section 8 program. Tenants have to fall below a set income in order to live there and have their rent subsidized. Based on her income, Jackson pays $400 per month, and the government pays the rest.

The program that funds Neal Terrace has a long and troubled legacy. When legislation created Section 8 housing subsidies in 1974, most of the money went to multifamily housing projects, which became popularly known as “the projects” and used as a shorthand for poverty and urban neglect. In the 1980s, Congress shifted Section 8 funding toward “Housing Choice” vouchers instead, which allow tenants to rent from any landlord who agrees to accept HUD’s conditions, like inspections before the tenant moves in.

But over a million units nationwide still receive Section 8 funding under the project-based system, including 83,000 in Ohio. In 2020, HUD paid $526 million to cover rent at Ohio’s 1,307 Section 8 housing projects. The median income for Ohioans living in those projects was just $6,534. HUD outsources management of project-based housing contracts to state housing agencies, local public housing authorities and private companies.

But residents say inspectors don’t see dilapidated living conditions inside many units. Some properties have received passing scores despite multiple complaints to city housing departments and even life-threatening conditions like carbon monoxide leaks.

Jackson said she has made multiple complaints in person at BNT Apartments’ office. When she does, she said, someone comes out and wipes the mold off the basement wall with bleach, but it always grows back.

J&S Management, a property management company that is listed as the property contact in the city’s rental registry, did not return emails requesting comment.

According to HUD data, Neal Terrace has passed inspections since at least 2014. During its most recent inspection in 2019, inspectors gave it a score of 68, a drop from 77 five years earlier. To keep receiving subsidies, properties have to score at least 60.

Inspectors are supposed to check sinks, grade the condition of floors and ceilings, look for evidence of infestations, check the building foundation and note any potentially hazardous conditions in rooms not used for living, like basements.

Since 2015, Cleveland’s building department has received multiple complaints about Neal Terrace regarding the building’s heating system, fire damage and litter around the property. Two of the complaints led to citations, according to the city’s housing data portal.

A carbon monoxide leak at the property in 2015 sent six people, including three children, to the hospital. The city cited the property owners a few days later for problems with the heating system. The building department received another complaint about carbon monoxide leaking from a boiler in 2018 but didn’t cite the owners because they had a receipt from a mechanic that said they fixed the problem.

When HUD subsidizes a rental through the Section 8 voucher choice program, inspectors look at the unit the tenant lives in or is about to move into. But for multifamily apartments, they don’t enter all the units. According to HUD guidelines, inspectors are supposed to enter a sample of units chosen at random by a computer program.

HUD did not make any officials available for an interview.

According to a 2019 HUD press release, 96% of properties pass the inspection process. That March, the department switched from giving property owners 120 days advance notice that there would be an inspection to giving them 14. The department said many landlords had used the advance notice period to make “just-in-time” repairs, rather than consistently maintaining their properties.

Nationally, the pass rate for HUD multifamily housing inspections actually crept up from 94% the year before the policy change to 96% in the year after. In Ohio, the rate went from 93% to 95%. Inspections across the country virtually halted between March 2020 and June 2021. When they restarted, the national pass rate dipped to 90%, while Ohio’s pass rate dropped to 85%. Of the four Cleveland properties inspected between June and September 2021, two failed to meet the 60-point mark.

What tenants can do

“There are so many different owners of subsidized housing,” said Abigail Staudt, managing attorney for the Legal Aid Society of Cleveland’s housing group. “I think most of them don’t try to (skirt) housing quality inspections, but I’m sure there are a handful of exceptions.”

For housing project residents, moving can mean losing access to rent subsidies. When they move, tenants who have Section 8 housing choice vouchers from HUD can apply their subsidy to their new apartment as long as it passes HUD inspection, said Staudt. But when residents leave multifamily housing sponsored by HUD, the subsidy stays with the unit.

A spokesman at HUD’s federal offices said that tenants should always try working with their property manager first to resolve problems, but if a renter in Section 8 housing believes their unit isn’t being properly maintained, they can complain to the department that administers the HUD contract or call their local HUD office.

Staudt said that tenant coordination can encourage HUD to address widespread problems at a property.

“One of the things that our local representative from HUD has said is that the more people actually contact HUD about a problem, the higher that building is elevated as a HUD priority to to look at,” she said. “If just one person calls about the water pressure not reaching the ninth floor, I don’t know how quickly they would respond to that. But if seven people do, they’re going to say, ‘Oh, there’s a problem in that building.’”

In some cases, Staudt said, tenants have had more luck getting improvements by going through city housing departments. Staudt said any Cleveland renter, including Section 8 tenants, can pay their rent to an escrow account held by the court instead of the landlord until major problems are fixed. Subsidized tenants would only be able to withhold the part of the rent they typically pay, meaning HUD would continue to pay its share directly to the landlord.

In those cases, too, tenant coordination makes a difference, Staudt said.

“When one person deposits their rent, it’s one person’s rent,” she said. “But when 15 people deposit their rent, it starts to hurt for the landlord after one or two months, and so it really does get their attention.”

However, relying on tenants to hold property managers accountable can be risky, she added. If tenants go about it the wrong way – for example, by refusing to pay their rent without depositing it with the court – they could face a legal eviction.

“Tenants aren’t experts of the law,” Staudt said. “As much as they can try to access information, it’s still really difficult to navigate the court system, and if your landlord has filed an eviction, you’re in a defensive posture.”

To file a complaint about Section 8 housing in Ohio, call Assisted Housing Services at 877-506-3552.